Their YouTube-video got more than 30.000 views, they were invited by the biggest radio-DJ of the Netherlands Giel Beelen, they love Utrecht the most and all this started out as a joke: De Voorhoede, also known as Steven and Akke. My Personal Style’s Dainahara en Sanne met up with them at The Village on the Voorstraat.

So, this all started as a joke?
Steven: Akke and I both like Utrecht very much. We live here en we think it’s a great city. I made music already and Akke raps for a while now so we decide to do something together. Not to become famous, but because we like it.
Akke: I knew a beatmaker, Tim, the guy in the videoclip with the beard.
Steven: A really sexy man.
Akke: Yes, he is. And I know Siep, the guy who sings the chorus, he has a very catchy voice. So we recorded it all in an afternoon.
Steven: It wasn’t our intention to produce a song that got so many views and shared so often. But apparently Utrecht is a topic that a lot of people can relate to. Before we realised, everyone asked us to perform and give interviews.

Your song was played by 3FM’s Coen & Sander Show and you were invited by Funk FM and 3FM’s Giel Beelen, one of the biggest radio-DJ of the Netherlands. What was that like?
Akke: I was really nervous for the performance at Giel’s show. Being interviewed with three camera’s around you… Giel is also known for his cranky mood, especially with rappers. He once stopped a rapper in the middle of his performance because he thought it wasn’t good. Luckily he was very enthusiastic about us and our song, so it was a lot of fun. All the attention from the media is nice for a while.

For a while? Aren’t you planning something new?
Steven: We want to make another song, but we’ll see how it goes.
Akke: We have the advantage that people allready know us now via Facebook, Twitter and radio. The power of social media is enormous.
Steven: I think that if we make a new song we have to show a different side of us, a more serious side. We have to show people we are capable of more than just this.
Akke: That’s difficult though. We love the clumsy, not so serious style of rap. In the US gangster rappers are cool, in The Netherlands rappers shouldn’t take themselves too seriously.

We know you love Utrecht. What do you love the most?
Steven: The Village, the coffeeplace where we are now. I like to come here fridays to celebrate the weekend.
Akke: Café België, Boulevard…
Steven: In summer I like Ledig Erf. Park Lepelenburg as well.
Akke: I don’t really go out any more.
Steven: I used to go to the Monza, but that’s a sushi bar now. Utrecht has a lot of student bars, like all the bars at the Neude.
Akke: There aren’t any clubs in Utrecht now.
Steven: Yes, I really think Utrecht could use some clubs.
Akke: I do visit Ekko though.

And food?
Steven: I’m a vegetarian and the Thai restaurant around the corner of my home, Thai Orchid, has great vegetarian dishes, so I order a lot of take-out there.
Akke: It’s a great idea to not eat meat or fish. But I just can’t do it.
Steven: Meat is delicious, but I don’t think being vegetarian is hard. I don’t even use substitutes for meat. Akke, I’ll cook for you some time.
Akke: I also like Het Paradijs, a Chinese restaurant.

And shopping hotspots?
Steven: I order a lot online. I’ve got an easy, simple style. Levi’s and Nike are collaborating right now, I really like the collection. Jeans and sportswear, that’s my style. I always wear sneakers.
Akke: I always shop at De Bijenkorf. I like Replay and G-Star. But the older I get, the less interest I’ve got for clothes. But I always look in the mirror before I go out. For instance, I just wore a denim shirt on jeans. I thought it was alright, but I just don’t feel the denim-on-denim.
Steven: Jort Kelder has such a nice style of fashion, I’d like to shop with him some time. Sounds like ambition!

What else would you like to accomplish?
Akke: It would be great to be a guest at De Wereld Draait Door (Dutch tv-show), maybe to promote our second single.
Steven: Do you know the poll ‘most sexy vegetarian’ of the Dutch foundation Wakker Dier? I’d like to be the next most sexy vegetarian. And our last ambition would be to perform in Utrecht’s very own Galgenwaard Stadium. 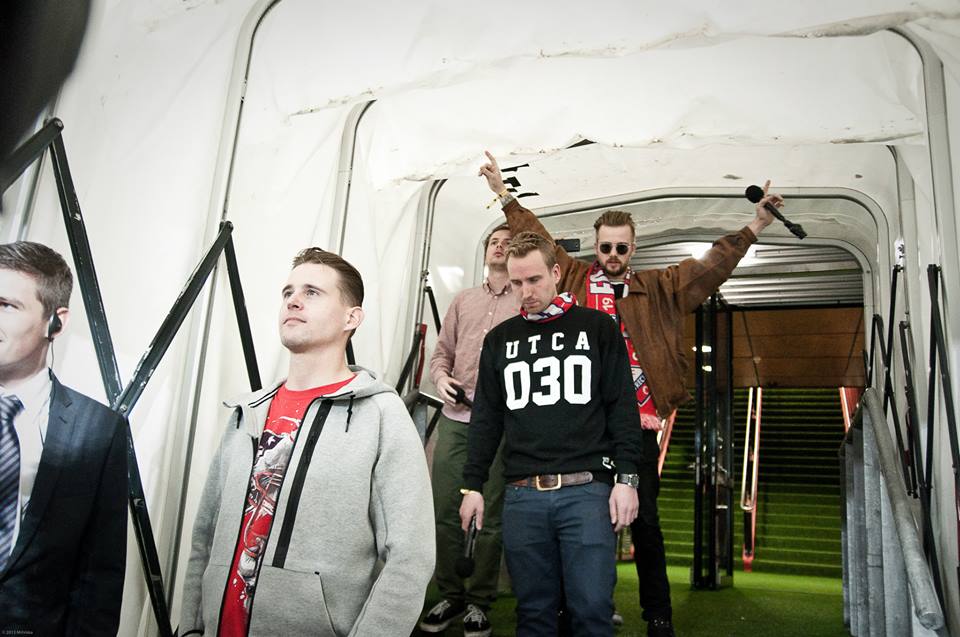 Dear readers, you must know: this interview happened a few months ago. One of those ambitions is already accomplished: De Voorhoede got its performance at Galgenwaard Stadium. Also Akke made a solo single and the guys are working on a second single as we post. See clips of Akke’s single and the performance at the stadium below!

Want to keep track of their every move, check the FB Page. Pics are from the ‘De Voorhoede’ FB Page.

To the guys; thanks again for the fun afternoon and keep up the good work! See ya!

Note: Interview by Sanne Wierda – love is the new black