Welcome to the Mini Tours of Explore Utrecht! In the next six weeks, our photographers Daniel, Pierre and I will take you along in a discovery tour in our city, through a series of pictures and articles. So grab your phone, open up this article and walk along with us!

In this first mini tour, we will guide you to the Twijnstraat and Twijnstraat aan de Werf. Walking or cycling through the Twijnstraat has always given me a special feeling – as if you were passing a small village or a special neighborhood.  I guess it’s time that we find out more about the story behind this street and its small extension by the canal.

The Twijnstraat (the name was possibly derived from the old Dutch word ‘twijgen’, literally means ‘twigs’). The area was one of the two trade settlements founded in 1122, surrounded by the Utrecht’s city wall. For that reason, the Twijnstraat is the oldest shopping street in Utrecht and, initially, aimed to meet the daily needs of the people living in the area – with its neighborhood butcher, bakery and grocers. Nowadays, you can find many restaurants, cafés and a cinema. And those who prefer buying biological produces, you should drop by at the largest Ekoplaza in Utrecht, or even the biological section of the local Albert Heijn.

If you approach the city center from the south – for example, the Utrecht Vaartsche Rijn Station – you’d most probably spot the Nicolaikerk, overtowering the surrounding houses. This beautiful Roman church was built in the 12th century. It used to be a parish church, but now it used by the Protestant Church. Then you’ll find the many restaurants and cafés along the Wester- and Oosterkade canals. The Ledig Erf, where you can find the famous Greek restaurant Stelios and Speck, is used to be the location of the Tolsteeg Gate. In the past, this area had to remain empty (leeg or ledig in Dutch). Interestingly, the Utrechters, who entered the city through the gate, called the area ‘Ledig Erf’. But it is actually the Tolsteeg barrier, located right across the bridge. On this Tolsteeg barrier, you will find the former Tolsteeg Police Station (a great example of architectural style known as the Amsterdam School), art house cinema Louis Hartlooper, Meneer Smakers (best hamburger in town), Café de Poort and Café Ledig Erf, where the city organizes the Spring- and Autumn Beer Festivals.

Now the choice is yours: to dive straight into the hustle and bustle of the lively Twijnstraat or to the Wijde Doelen, which will lead you down towards the Twijnstraat aan de Werf, right by the water. I would suggest that you turn right at the Wijde Doelen, then left to the Schutterstraat, which will bring you to an oasis of calm. As you’ve probably noticed, this neighborhood has a lot to do with the city militia, who were responsible for the safety of the city. The militia practiced far away from the city center, so in case of rebellion, they could be kept far away in a distance. Then, if you turn left, you’ll find yourself in the middle of the Twijnstraat. 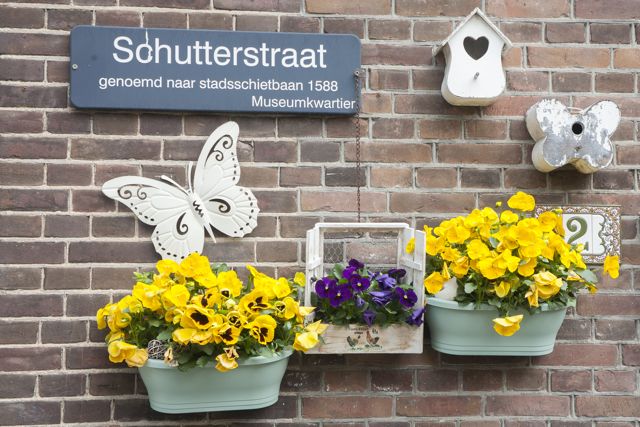 Turn right to the Twijnstraat, and be careful of the bikes. Today, the Twijnstraat is a one-way street and an important cycling route from the southern part of the city. It is different than 50 years ago, where you can hardly find cyclists passing through. There was a tram, though, and that’s how Café Lijn 4 got their catchy name. The Twijnstraat has everything you need – a grocer, a butcher and a pharmacy, but look further. The Stichste Taveerne, The Boothill and Lijn 4 are great places to hang out over some drinks and bites. You can go to Stach for something sweet and next to it, walk down the stairs to the wharfs.

Welcome to the second city’s inland harbor. At least, that’s what it was. Imagine yourself arriving with a boat full of beer barrels from the Vaartsche Rijn or the Kromme Rijn, through the gates, to the Oudegracht. It is the busiest part of the canal. Large chests and piles of twigs got carried off the boat and into the backhouses (annexes). Twijnstraat aan de Werf is the only place along the Oudegracht without wharf cellars. ‘Keep it plain and it will turn out to be special’ was the credo. Well, I wouldn’t call it plain. The strikingly small plots (3.5 meters) are further renovated with a front house, or if not, an annex, and you’ll notice the difference in heights (about 4 meters). This gave room for creative solutions. Check out number 1L, 1M, 1 and 5 to get a better idea.

If you look across the water, you may notice the brewery, the schools and the steps and bell gables. But please mind your step, as the wharfs remains a public area. Walk towards the end of the wharf, under the gate (or Café de Poort), walk up, turn right and another right. This will lead you to another part of the Oudegracht, called Achter de Twijnstraat, as they used to call it in the past. Now you can notice better the architecture style of the houses across the water, for example, number 5. Now, what do you notice?

At the Vollersbrug, turn right, go over the bridge, then turn left. Our mini tour ends at a chained stone. This stone is chained to the building, so that the devil won’t play around with it – according to folklore. Now, I would recommend that you turn around and walk back towards the Twijnstraat to discover more things about the city. And there’s a lot more than what meets the eye!

This is my way of sharing the best of Utrecht with locals, expats and tourists. Come and explore the city with us and enjoy the ultimate experience.

Before using any pictures on this website, please, contact me at [email protected] to put in a request.
Copyright © 2021 All Rights Reserved. | Powered by Movinmotion