A few weeks ago, we set out to experience the Bucketlist festival. The event took place at the Metaal Kathedraal, a beautiful old cathedral repurposed as a cultural centre, and all proceeds went to the Make a Wish Foundation. 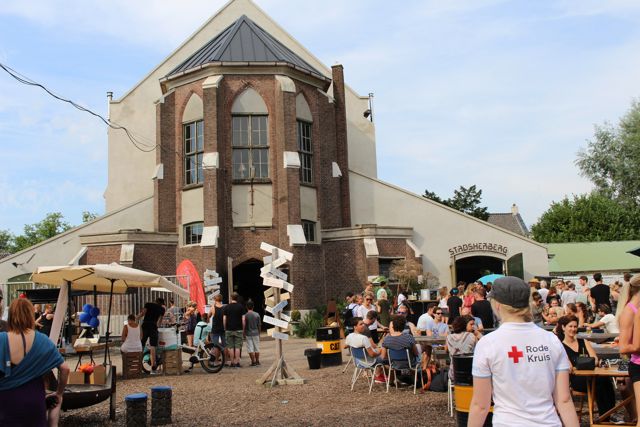 We were welcomed by the sound of metal being struck and glass shattering to the ground: festivalgoers were smashing a car. Old VCRs and electronics of all kinds were neatly lined up on shelves, awaiting a similar fate. This was going to be interesting!

Our first stop was the bar – in a heat wave, can you blame us? Then, armed with mojitos, we hit up the silent disco. The crowd bumped & grinded and even interpretive danced to unheard beats, and soon we were among them. Quite the odd sight from afar, but highly recommended!

Warmed up now, we set off to explore the festival. With every inch of the grounds hosting something new to discover, we didn’t know which way to look! Just as we left the pie-in-the-face area (yes really), a progression passed by, somberly carrying their (surprisingly cheery) friend in a casket. A tuxedoed fellow led the group and read out his eulogy. Tucked away in a hidden corner behind some pole dancers, couples wrote each other poems on typewriters.

Everywhere we turned, the scent of fries followed… But for the health conscious, there was also sushi – to be eaten off of naked models, of course. Apparently you could eat bugs somewhere too but, as someone who will flee from the tiniest of spiders, I didn’t care to look for that particular event.

The Bucketlist festival was unlike any event I’d ever been to before – with so much to do and see and in such a unique location, I felt like a kid out exploring a make-believe world!