At the foot of the large stairs on Jaarbeursplein next to Beatrix Theater you will see a large cargo bike, it has been there for a few months now.

Every day I ride my bike to central station to get on the bus to work. On my way back in the afternoon I noticed a cargo bike on the Jaarbeursplein, it has been there since November, with a sign that reads ‘fresh meals’. And this peaked my curiosity. On a freezing and windy day I decided to take a look.

The black cargo bike offers home made meals by: ‘Smulders kookt’. Miss Shamida Smulders, the owner of the meals on wheals, is standing underneath a large piece of canvas wearing a warm cap and mittens. Even though it was freezing and windy that day, she enthusiastically talked about her ‘cargo bike business’! Shamida worked in real estate, but she got tired of the daily routine, Smulders Kookt is a combination of her passion for cooking, and her love for entrepreneurship. After a short chat she lifts the hatch of the cargo bike and happily talks about the meals of the day. (How does she do that? My feet were frozen after the few minutes I spend talking to her and I was getting grumpy.)

Smulders Kookt offers three homemade meals per day. One meal is especially for vegetarians. The other dishes can vary from: a meat stew, Indonesian, Moroccan or even Dutch. All dishes cost € 7,50, not so expensive for a fresh and homemade meal, right? Only thing that is left for you to do, is to warm up your meal at home.

I have tried three meals: the meat stew, andijvie stampot with köfte and a Vegetarian Moroccan dish. All three meals were lovely but the meat stew is my favorite. Next time that I’m craving take out, I will definitely try one of her other homemade meals. I think Smulders Kookt offers a perfect meal, for busy days that you don’t feel like cooking. It is fresh, pure and made with love. What else would you want?

If so, go find out for yourself. Smulders Kookt is parked on the Jaarbeursplein on weekdays from 16.00 till 19.30. If you want to find out more check the facebook page!

Contribution by Samantha Wicht of Taste with Sam
Photo’s from the Smulders Kookt Facebook Page. 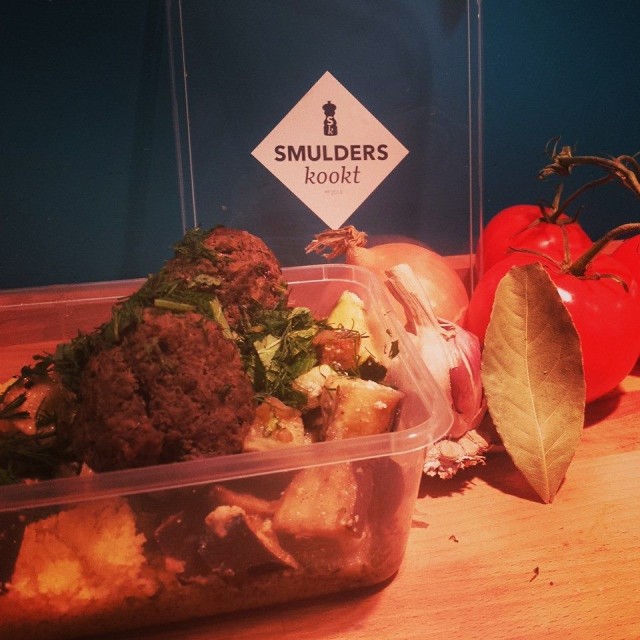