Welcome to the Explore Utrecht Mini Tours! In the next six weeks, together with our photographers Daniel and Pierre, I will take you in a discovery journey in our beloved city, through pictures and words. We will go to certain places, which we believe is interesting and deserves more appreciation.

“Romanesque? You meant Roman?” you might ask. No, I do mean Romanesque – the architectural style of medieval Europe. During the 10th and 12th century, people built churches, monestary and castles in that style –  thick walls, relatively small half-circle doors, gates and windows and without stained glass. Still does not remind you of anything? Then it is time that we learn more about the Romanesque architectural style. And let’s use an app to count your steps and monitor your endurance.

The current Dom Church was built in Gothic style; the relatively thin walls, pointed arches, and stained glass windows. The former version, which existed in 1023 – 1254 was built in Romanesque style. Unfortunately, you could hardly notice it above the ground level. But, at underground level, you will be able to discover one and another by visiting Domunder and under Café Walden. In the ballroom of Café Walden, you will still be able to find some remnants of the imperial palace Lofen. Above the ground, you may be able to see some traces of the Romanesque style at the Flora’s courtyard. There, next to the Dom Tower, is a small house, de spinde.  It used to be the home of the tower guard and part of the bishop’s palace. Next to it is the foundation of a spiral staircase, which connects the bishop’s palace to the Michaëlskapel (St. Michael’s chapel) in the Dom Tower.

In the old courthouse on the Hamburgerstraat, you can also find the remnants of the Paulusabdij (St Paul’s Abbey). As to the only Romanesque remnants, we need to walk back to the Dom square. On the Korte Nieuwstraat 6, you will find Huize Molenaar (www.huizemolenaar.nl), which organizes exclusive parties and dinners. In the beautiful courtyard garden, at your left, behind the bench, you will find a remainder of the northern sidewall of the Romanesque church, dated 1050. Then, if you walk outside through the back door, at your left, you will find the southern external wall of the transept.

The Pieterskerk (St Peter’s church) and Janskerk (St John’s Church) are great examples of the Romanesque churches – the most part of them are still intact. The Romanesque part are made of a grey stone and the church is characterized by a three-sided chancel, with a rounded inner wall.  The two towers, which were initially part of the churches are unfortunately destroyed during a summer storm on 1 September 1674. At the St John’s Church you will see the traces of the towers’ perimeter on the pavement of the west side of the church. You can visit the St Peter’s church and the St John’s church during the Kerken Kijken Utrecht – a cultural history project, which enables public to visit 12 churches and the Catherijneconvent with no entry fee.

Now, I have saved the best for last: right between the Conservatorium building is a modern gate. Behind it, is a garden – the centerpoint of the St Marie’s courtyard. This garden has become a place for rest and contemplation for tourists and people who live in the surrounding. As part of the Mariakerk, which no longer exists, the place offer religious people a place to pray and to reflect in peace. On the left, you could still see the ruins of the courtyard – the round boughs with the pillars are typically Romanesque, hewed in one piece. On your right, at a slightly higher level than the garden is a square, where you will be able to notice the contours of the church on the pavement. Across the street, on side wall of the Mariaplaats 17, you will find a tableau, which illustrates the church and its surrounding. As you can see, it is a remarkable building. 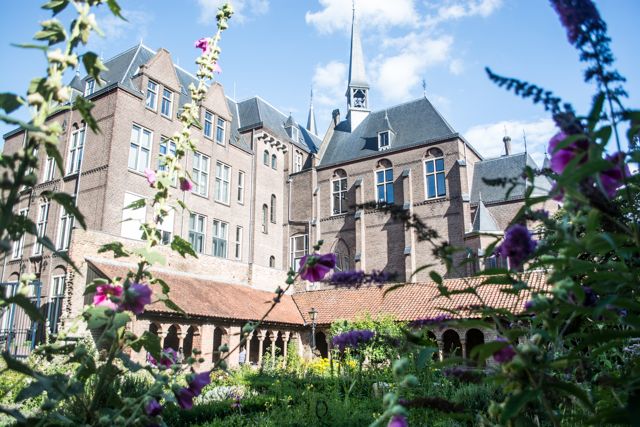 And, what do you see if you look at the map on your app? Do you notice anything? Either way, you’d really need to look for it. But the remnants of the Romanesque monuments are really beautiful. Now why don’t you take a seat on a bench in the courtyard or head back to the city. There are still many cool things to discover! 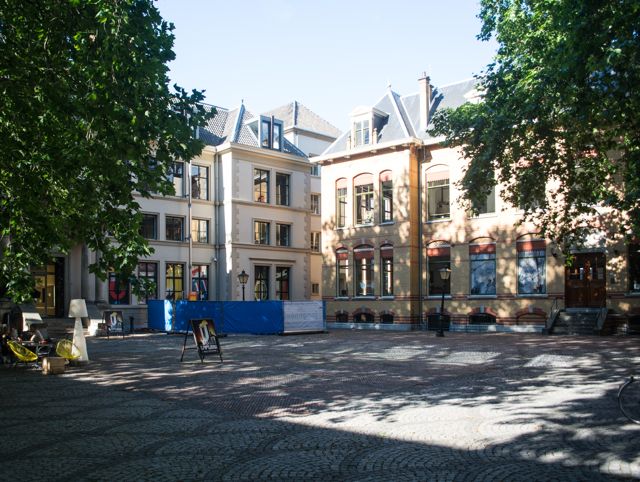