If I get to decide where to go out for dinner, 9 out of 10 times I’ll pick an Indian restaurant. I love Indian cuisine! The rich curries, a perfect combination of spicy and fresh flavors, often paired with un-Dutchlike levels of hospitality, always ends in an amazing evening for me. When I heard that Indian/Nepalese restaurant Surya was going to open an establishment in Utrecht, I couldn’t help but take a look (and have a taste!).

Surya is yet another concept that flew over from Amsterdam (and Hilversum), but nonetheless the version in Utrecht is a little different from its previously opened cousins. The building doesn’t really stand out from the other bars on the Janskerkhof, but as soon as you step inside it’s like stepping into an entirely different world! The interior design is a combination of modern style with warm dark colors and authentic details, like the beautifully embroidered pillows and the traditional Sitar showing off its beauty in the corner. You’ll also see a lot of details inspired by the elements of water, fire and earth in the interior design.

The main difference this Surya in Utrecht makes from the other establishments is that it is divided into roughly two seperate parts: the restaurant and bar downstairs and the lounge area upstairs. In this lounge area you can melt away into the soft cushions of the couches and enjoy some nice cocktails and bites.

The kitchen staff at Surya only consists of genuine Indian and Nepalese chefs, who make their dishes completely from scratch, with lots of passion and love. Even the paneer cheese is made from scratch!

Just one look at the menu makes our mouths water! Apart from my favorite classics, like Chicken Tikka Masala and Madras, we also see a lot of lesser known dishes. Especially the Nepalese dishes were a surprise for us, like the different types of Momos (some sort of steamed dumplings) and a dish with a name that made us giggle a little: Yeti’s food, a noodle dish with chicken and vegetables.

However, the menu doesn’t just consist of meaty delights, there’s also a lot of choice for the vegetarians! There’s a large selection of vegetarian dishes on the menu that all sound incredibly delicious as well!

We decided to start off our meal with a mixed starter platter, including Tandoori Chicken, Chicken Wings, Samosas and lots of other bites. All very tasty! My personal favorite was the Tandoori Chicken, deliciously tender and flavorful. To accompany these starters, we also ordered a Mango Lassi, which was amazing! You could really taste the flavor of fresh mango in it. 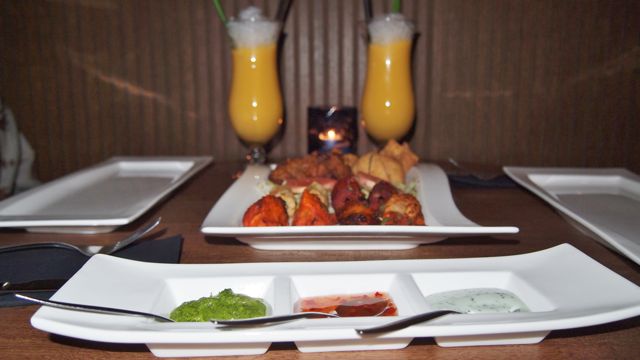 An array of different flavors

For the main course we decided to let our lovely hostesses pick a selection of dishes, which of course resulted in a table filled with food! Among the dishes were. Butter Chicken, Lamb Madras, Biryani, Dahl and Raita. We also got to try the Nepalese Momos, which were very good! The dumplings were served in a creamy saus with a little bit of cheese on top. To top it all off we also got some delicious Garlic Naan on the side, which is freshly made every day by the chefs at Surya!

Our two personal favorites of the evening were the Butter Chicken and the Lamb Madras. The Butter Chicken was tender and flavorful, in a creamy, hearty sauce, perfect! The Lamb Madras was spicy, but not in a way that diminishes the other flavors. Apart from hot spice you could taste an array of different flavors, an interesting mix of spicy and sour.
After all these amazing dishes we were unfortunately too full to finish the meal off with a dessert, so we’ll have to come back some time to try those! Judging by the taste of the dishes we’ve tried, it’s will be amazing!

I can definitely say that Surya has proven itself as one of the best Indian restaurants in Utrecht. The hospitality, the warm interior design and the delicious food was enough to convince this lover of Indian food! From now on, I think Surya will be my go-to restaurant for Indian food. Will you give it a try?