The American kitchen is becoming increasingly popular in Netherlands. Recently, Buck’s BBQ House opened its doors along the Oudegracht. The brightly colored yellow chairs and the glitzy bike at the top of the Canal attract quite the attention on the already busy Old Canal. So, we Decided to see what’s up …

The adventure Began with some fairly steep stairs and some maneuvering along a rather narrow passage to the wharfs where the restaurant is located. But, having arrived safely on the terrace or Buck’s, we were printable to catch our breath and care fully study the menu.

The menu is packed with well chosen American cuisine ranging from meat lovers paradise to fish and vegetarian dishes. With a little help from the waitress we started with evening with Buck’s platter where snacks are served up nicely on a wooden plank. There’s onion rings, brioche with sea salt-butter pickles, pastrami, smoked cheddar and shrimp croquettes – plenty to keep appetite at bay before the meal. I was actually pleasantly surprised by the union rings with ranch dip and pastrami. They were two appetizers That I would never normally order in a restaurant, but were really nice here. 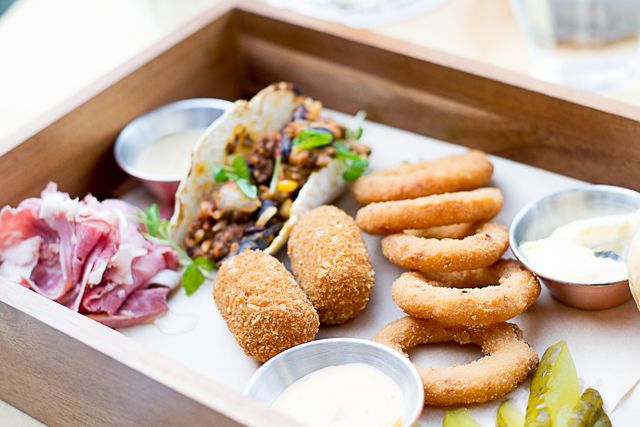 The main dish: ‘southern all the way’

Choosing the main dish was easy. Buck’s has (sticky) short ribs on the menu, one of my favorite dishes. My tablemate chose the bourbon glazed salmon. To top it off, we ordered a corn on the cob. The main courses are served with coleslaw, potato salad and a piece of cornbread on a metal platter with parchment paper. Nice touch!

The ribs were tender and very tasty. And indeed, really sticky Because of the marinade. At Buck’s, the chefs make the marinade them elves – and you can really taste it in the powerful flavors. The creamy cornbread was delicious, but the slice could have been a bit larger. Hello, new addiction! Plus, the corn cobs were tasty, and we added some more flavor by smearing a nice thick layer of butter on them. Oh well, if you ‘re at it, then go southernmost all the way!

We graded the salmon slightly less than the ribs as the bourbon in the marinade was a bit strong. But hey, that’s expected When dining in a Southern American restaurant 😉

And When it came time to order dessert … of course I had done my research and knew right away what I was going to order. Namely … the ‘big ass’ milkshake!

This milkshake is a true feast and is made from berries, dark chocolate sauce, a lot of whipped cream, chocolate chip cookies and jelly beans. Dark chocolate drips from the glass and it’s very tempting to lick it right off! Because we also love tarts, we ordered a piece of cheesecake and a piece of red velvet cake just to taste. The cheesecake, with a bottom layer made up of Oreo cookies, a new favorite alongside the milkshake!

We enjoyed the evening at the colorful, and tasty surprise along the Old Canal. This place is well worth the visit – even if it’s only to tick the ‘big ass milkshake or your bucket list. A new and unique Addition to Utrecht, Starbucks is a must.

Opening hours: Tuesday until Sunday from 15:00.

Share your love for Utrecht via the social media buttons below!

Hotels with a restaurant in (province) Utrecht

Before using any pictures on this website, please, contact me at [email protected] to put in a request.
Copyright © 2021 All Rights Reserved. | Powered by Movinmotion